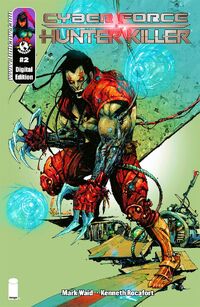 Ripclaw (born April 1, 1969) is the name of a comic book character from Top Cow Productions. He is also a member of the Cyberforce.

Not much is known concerning Ripclaw's past. Many people believe that he is with the Apache tribe. Although it is true that he spent much of his youth with the Apache, it is also true that he spent just as much, if not more time, with the Cheyenne. He has also lived among the Navajo and the Lakota Sioux. He is in fact descended from a primitive woodland tribe that lived thousands of years ago in what is now the Northeastern United States. He left home after he began to develop his mutation, and injured a fellow student during a martial arts training session. Ripclaw questioned his father over his hands, and his father became evasive, and became enraged when Ripclaw pressed on with his questions, asking his father about why his skin was much paler than that of other students. He left home, seeking answers, and ended up on an American Indian reservation, where he stumbled into a fight and was knocked unconscious. He was found by a powerful shaman, who taught him about his ancestors.

They went through a ceremony where Ripclaw experienced a joining and conversing with the spirits of his ancestors and the spirits of the land, who told him that he was Robert Bearclaw, and not Robert Berresford, as his father had always told him. The spirits told him that he was to be their warrior and that he was to lead the Indian People back to the greatness of spirit that they once had. When he finished the ceremony, involving tribal flesh hooks and war paint, the shaman marked him with his blood, and this became the red markings over his skin, reminding him always of the pain and truth of the ceremony that he had been through. He was raised primarily by the shaman after that, who taught him how to use his special talents. This was explained early in the Cyberforce Vol 1 comic series, when Ripclaw's healing factor began to reject the cybernetic implants, and he was put under a heavy anesthetic, and remembered his early teenage years.

Again, he has a murky past, but one thing that is known is that he spent a lot of time at Cyberdata as a S.H.O.C. He ended up at Cyberdata after he attacked the son of a local sheriff who had raped a young Indian girl. Ripclaw was shot, and ended up at the sheriff's jail, waiting to be delivered to the courts, only there was someone at the bar who witnessed Ripclaw's mutations, and contacted Cyberdata. They then removed his hands and replaced them with cybernetic replacements. Robert was also romantically linked with Misery before she betrayed his team and he joined Cyberforce.

Ripclaw is definitely the strong, silent type, the quintessential loner, not very sociable, no fun at parties, but definitely the guy to take if you are going on a hike through the woods. He's highly intelligent, introspective, very well-read, and eminently knowledgeable especially with regard to past and present Native-American cultures. He has a strong sense of right and wrong and embodies all the classic virtues of honor, sincerity, respect and compassion. The other members of Cyberforce often look up to him for moral guidance and emotional support.

Outside of his own short lived on-going series and cyberforce, Ripclaw has been seen in a number of other comics. He was seen in The Darkness affianced to Jackie Estacado's former love interest. Another major appearance for him has been his reoccurring team-ups with WildC.A.T.S. member, Warblade, a superhero with very similar powers. He was also the main villain in the JLA/Cyberforce crossover between DC Comics' Justice League of America and the Cyberforce which was published in 2005.

It was later revealed that this was in fact not Ripclaw at all, but a clone concocted by the alien ship in which he was buried in Antarctica. This clone was created by the ship in an attempt to heal and resurrect Ripclaw but the ship was unable to heal him, creating instead a polar opposite of Ripclaw, who set out to destroy and kill everything that Ripclaw loved. The ship tried again to resurrect and heal his body, and succeeded, thus enabling the original Ripclaw to return as a good character in Cyberforce Vol 2, issues 1 and 2.

Most recently, Ripclaw and Cyblade were featured in a crossover with Wolverine and Psylocke, an interesting teaming as the two X-Men are commonly acknowledged as the basis for the two Cyberforce cyborgs.