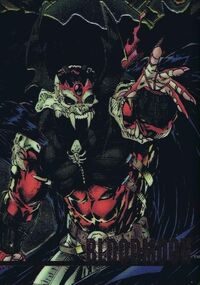 Robert Diaz is a former Team 7 member, but he was never exposed to the Gen-Factor because he was presumed dead after an operation in South America. He was found by the Kindred in Caballito Island and became their leader, taking the serum that changed them and becoming addicted to it.

Retrieved from "https://imagecomics.fandom.com/wiki/Robert_Diaz?oldid=59383"
Community content is available under CC-BY-SA unless otherwise noted.