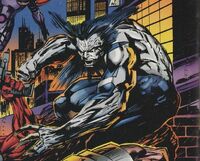 Robert DuVale, better known as Kilgore was a supervillain who was part of the super-powered team simply known as The MERCs. He provided additional brawn and savagery to the team, consisting of members Brutus, Hellslayer, Razer and their leader Deathtrap. Both Kilgore and the MERCs were a constant enemy to StormWatch.

Kilgore made his first appearance during the funeral service for StormWatch program founder John Windsor,[1] when the MERCs ambushed funeral attendees Battalion, Synergy and Strafe to abduct Strafe, whose seedling powers were still dormant. During the ensuing struggle, Strafe was activated by Synergy in order to save his life. Kilgore took the opportunity to attack Synergy, almost killing her with his venomous claws to her back. Briefly, Synergy begged for her life, suggesting she could help Kilgore return to the normal life he once had. Kilgore refused the offer, referring to his previous life as being a "nobody. Being stepped on and having nothing". Synergy quickly (however temporarily) deactivated Kilgore, neutralizing him during the fight.[2]

Kilgore was not seen again until Battalion's personal mission to Gamorra,[3] where the MERCs were holding the members of StormWatch Prime captive. Kilgore returned to action one final time during StormWatch Prime member Flashpoint's private investigation into the reasons behind his team's capture.[4] Tracking down Kilgore throughout the streets of Bangkok, Thailand, Flashpoint cornered and questioned Kilgore about the MERC's motives in capturing StormWatch Prime and holding them for all the years after their Desert Storm mission. When Kilgore refused to answer any of Flashpoint's questions, he was killed.

Kilgore is possibly the first super-powered being to be killed by any member of StormWatch as the team prides itself on having a no-kill policy during their missions.

Retrieved from "https://imagecomics.fandom.com/wiki/Robert_DuVale?oldid=49080"
Community content is available under CC-BY-SA unless otherwise noted.