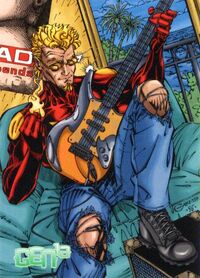 Robert "Bobby" Lane is the son of John Lynch, a superpowered special ops member of Team 7. For decades the corrupt I.O. organization had been carrying out genetic experiments designed to create super-soldiers for the government. Team 7 were among the 12th generation of this experiment (Gen 12), and among the first successes - previous attempts had ended in death for the subjects. When many of the members of Gen 12 became fathers, I.O. became interested in their children: Gen¹³. According to the Gen 12 series, Lynch's wife left John Lynch when their son, Robert, was very small.

The exact circumstances of his mother's death are unknown, but Bobby was put up for adoption under a fake name. (It was later revealed that several Team 7 members who had gone into hiding themselves knew about this and arranged this to protect Robert from I.O.) During his childhood Bobby often changed foster families, because he was unable to fit in with them, though he became good friends with his foster sister Han Tsung during his stay with her family.

When Bobby became a teenager, I.O. decided to restart Project: Genesis which had done the Gen 12 experiments. They performed genetic screenings across the country and recruited all children and teenagers who were gen-positive, usually indicating that they were the children of a Gen 12-member. Bobby was recruited to be part of the Gen¹³ project, unaware of this history. There he began to connect with others such as Grunge, Caitlin, and Roxanne Spaulding. And it was there that he first had his latent powers unlocked. But when he and his friends discovered what the end goal of the project was, and that the plan was to control any successes by numbing their wills using drugs, they planned an escape. The four of them were joined on their escape by two others: Sarah Rainmaker and Matthew Callahan. Unknown to the rest of them Threshold was loyal to I.O., and only went along because it was his mission to try and awaken the latent powers of Freefall and Grunge (who hadn't manifested any yet) and create a killer instinct in the group that the government desired in its superpowered operatives. He succeeded, and then betrayed the group. All of them except Fairchild were recaptured. She came back for them, and having made a second, successful escape they allied with John Lynch, who had become a high-ranking member of I.O.

Lynch took the team to San Diego to hide from I.O. and Bobby began to develop romantic feelings for his teammate Sarah Rainmaker. Sarah didn't return those feelings though, as she considered herself a lesbian. The two did become good friends though. Some time later it transpired that Lynch was Bobby's father, and after some initial awkwardness the two have come to accept this new dynamic in their relationship.

During his time with Gen¹³, Bobby began to develop powerful psionic abilities, allowing him to read and control the minds of others. He lost these powers when another Gen-Active, a powerful telepath damaged the telepathic part of Bobby's brain. Bobby defeated the telepath and his brothers and became romantically involved with their sister, Leslie, a Gen-Active codenamed Trauma Queen. Their romance was short-lived as Robert and the rest of Gen¹³ apparently died in an explosion.

In fact, Gen¹³ had been displaced to an alternate universe and they returned to their own Earth months later.

A new Gen¹³-series, written by Gail Simone and with art by Talent Caldwell has been announced for mid-2006 after the Wildstorm 'reboot'. Burnout has been shown as a member in preview art.