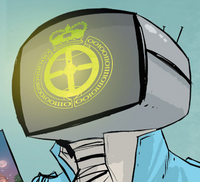 The Robots are a society of, well, robots, who outsource their military to the Landfallian army in their ongoing conflict with the "moonies" of Wreath. The citizens' physical appearances are mostly humanoid with monitors in place of their heads; however, they are completely electronic and have the ability to morph their right arms into energy cannons. Their monitors can be used to either convey important visual information or representations of their emotions and thoughts of the particular moment. Their monitors are otherwise blank. They reproduce through sexual intercourse and their lineage seems to reflect their rank. The royalty are called "bluebloods" among the Landfallian population; this could relate to an old terminology of calling royalty bluebloods, or it might suggest that their blood is actually blue in color (possibly because of the use of Hemocyanin as opposed to Hemoglobin). Non-royal robots tend to have non-color monitors. Other terminology tends to be derogatory, with evidence of others referring to robots as "drone(s)" or "machine head(s)."

Royal robot names follow the pattern of Rank and roman numeral, such as Prince Robot IV and Baron Robot XXIII.

Retrieved from "https://imagecomics.fandom.com/wiki/Robots_(Saga)?oldid=60503"
Community content is available under CC-BY-SA unless otherwise noted.