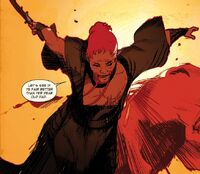 Roln is the leader of Poluma. He sneaked in with brother, Grolm when his ship was scuttled. He gained the trust of local leaders and then betrayed them by allowing other pirates to raid and take over the city.

Roln controlled the people by keeping education and books out of their hands. He kept them poor by rigging a city run gambling ring. He despised Salus and was hellbent on raiding the city once he unlocked a Helm Suit.[1]

Attack on the Caine's

Roln spotted Johl Caine's Subx one day when he was out on a hunting mission. He used a Mammoth to distract them and infiltrate their ship. He stole Johl's eye to control the optically activated Helm Suit and his two daughters.[2] However, he sold Della Caine to Voldin,[1] while he raised Tajo Caine himself.[3]

When Roln was suddenly attacked by Stel Caine and Marik Caine who had discovered Poluma, he threw Marik into a coliseum tank to influence Stel to tell him where the probe is located.[1] When Marik beat the Mammoth Isopod, he jumped down to challenge Roln one-on-one. When Marik turned to save his sister, Roln made his move and killed Marik. He removed Marik's eye ball to pilot the helm suit but found Tajo had already entered. She was fueled by hate for him killing Marik and chopped him in half.[4]

Retrieved from "https://imagecomics.fandom.com/wiki/Roln_(Low)?oldid=40347"
Community content is available under CC-BY-SA unless otherwise noted.