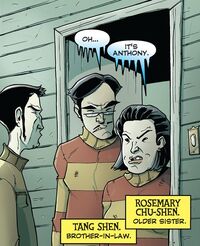 Rosemary Chu-Shen is the legal guardian of Olive Chu.[1]

When Olive didn't return home one day, Rosemary alerted her father, Tony.[2] Olive had been abducted by Mason Savoy and was being trained to become a great warrior.[3] Olive's test scores suffered from the lack of concentration. However, she soon started using her Cibopathy to help increase her performance in school and Rosemary became happy with her once again.[4]

Retrieved from "https://imagecomics.fandom.com/wiki/Rosemary_Chu-Shen_(Chew)?oldid=68892"
Community content is available under CC-BY-SA unless otherwise noted.