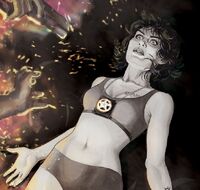 Later, Alex met with Rowan and learned that the man who had attempted to kill Rowan was under a spell. They talked about the lighter the man used had a hammer signal and realized that 'they', Aira, hadn't used spells in a long time. Later, Rowan and her partner, Morgan Chaffey, researched why someone would target her. They learned the man's real name was Rowan White.[2][3] Her co-workers, Nicky and Mike Perrini, began to investigate the case as well. Rowan stole the lighter out of evidence so that Alex could cast a locator spell to discover who was behind the attack.[4]