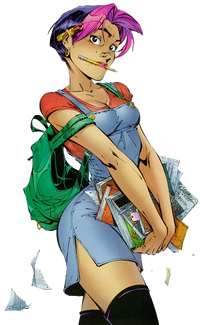 Roxy is the daughter of Team 7 member Alexander Fairchild and Gloria Spaulding. The two met when Alex was a soldier, stationed at Kelly Air Force Base in San Antonio, Texas. Gloria was the daughter of the base commander. Despite her father's dislike of Alex, Gloria and Alex grew close, but soon Alex was called away on another secret mission. Gloria, who had become pregnant, had no way of contacting him. Gloria later married another man and told everyone, including her daughter Roxanne, that the child was merely her stepchild.

Details on Roxy's life before coming to Project: Genesis are sketchy. But a picture of her past can be gleaned from comments Freefall makes over the course of the series.

During a dream sequence Roxy is called "trailer trash" by classmates from her Catholic school. This, along with Roxy's habit of sometimes wearing a crucifix necklace and comments during some conversations confirmed that she was raised a Catholic, though her behavior indicates that she is a lapsed Catholic.[1]

Freefall tends to speak with something of a valley girl accent, hinting that she may have grown up somewhere in Southern California, though she visited her mother when staying in New York City. In Las Vegas Roxy had missed her mother by mere hours at a casino she had been working at.[2] This could be a hint that Gloria Spaulding has a tendency to move often.

Roxy's father, Alex, was exposed to the Gen-factor, a substance which gave him and his fellow Team 7 members superhuman powers. Team 7's superiors, International Operations, thought that their children had inherited their powers and started Project: Genesis, testing and recruiting children who were gen-active from all over the U.S.A. Roxy is the youngest member of Gen¹³. She managed to escape Project: Genesis with them after they found out that the I.O. was planning to enslave them. During their escape, Roxy's powers manifested: she was now capable of manipulating gravity and took the codename Freefall.[3] Roxy became infatuated with fellow teammate, Grunge, whom she sees as "the man of her dreams". She developed a jealousy of her statuesque teammate, Caitlin Fairchild, who is often ogled by Grunge, even though she liked Caitlin a lot.

Life after the project

Gen¹³ relocated to San Diego after their escape and one evening, Roxy snuck out of the house to go to a dance club called The Soil Machine.[4] In the club, she found the alien, Qeelocke, who was hunted by alien bounty hunters. Gen¹³'s mentor, John Lynch, noticed the aliens arriving on Earth and sent the rest of Gen¹³ to help Roxy. They drove back the bounty hunters and the Queelocke became Roxy's pet. Shortly afterwards, Grunge finally returned her affections and the two became romantically involved. However, Grunge was unfaithful, insensitive and immature and their relationship often broke apart.

During her time in Gen¹³, Roxy would find out that Alex Fairchild was her father and that her teammate Fairchild was her half-sister. She would also learn that the woman she thought was her foster mother was in fact her birth mother. Roxy was deeply upset that her mother had lied to her for her entire life, even if the lies had been meant to protect her. However, the two did eventually mend fences. It also led to frictions between her and Alex Fairchild, who had become the team's mentor. After Alex explained to her that he had no way of knowing about her, she came to accept him as a father, but Alex died protecting the team shortly afterwards.

Over the next few months, Roxy had a lot of arguments with her teammates, who had always had difficulties understanding Roxy's infatuation with Grunge, her smoking habits, and her general attitude. Their concerns were proven correct when Roxy found out that Grunge had been having an affair with Swift from The Authority. Despite this all, Roxy was still in love with Grunge. During this time, Roxy also became a bit of an otaku, with a great love for J-pop music and anime.

Roxy was thought to be killed in an explosion with the rest of Gen¹³, but in fact, Gen¹³ had been displaced to an alternate universe and they returned to their own Earth months later.

A new Gen¹³-series, written by Gail Simone and with art by Talent Caldwell has been announced for mid-2006. Freefall has been shown as a member in preview art.