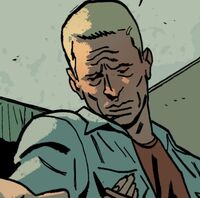 We have her now, we can keep her safe.

Roy was working on his car when Reverend Anderson and Kyle Barnes stopped by to see him. They were looking for his daughter, Sherry, who had been possessed by a demon several months previously. Reverend had believed he had successfully exorcised her but was now experiencing doubts and wanted to see if Kyle's touch would hurt her. Roy pointed them to Charleston to find her.[1]

Retrieved from "https://imagecomics.fandom.com/wiki/Roy_(Outcast)?oldid=37391"
Community content is available under CC-BY-SA unless otherwise noted.