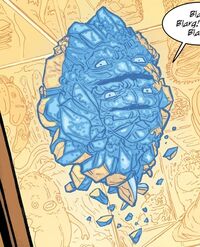 Rys is a reincarnated space twin from the binary system of Cygnus. He was constructed for interstellar cartography. He was believed to only say, "Blargh" and was thus ignored for many moments of consultation. However, the crew soon found themselves on a journey to the Sionnu Ternary System escorting Primor, an ex-slave who wanted revenge against his masters. On the journey, Rys began to speak English to Yuri Gagarin. This shocked Yuri. Rys replied that since he never though he was worthy of conversation, and that he had never shown any interest in learning his language, he never bothered attempting to communicate with them.[1]

As they traveled to the homeworld, they were pursued by Ryleth. Ryleth secretly attached himself to the bottom of the Nebula Left and called in to the Sionnu about their arrival. They soon passed through the gate. They were shocked to find Sionox waiting for them with a battalion of Sionnu warships.[1] Their ship was boarded by Ryleth the Hammer who had fixed himself to the bottom. When Rys tried to stop him, he was killed by Ryleth's hammer.[2]

Retrieved from "https://imagecomics.fandom.com/wiki/Rys_(The_Manhattan_Projects)?oldid=55426"
Community content is available under CC-BY-SA unless otherwise noted.