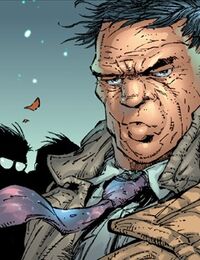 S.O. Silbert is a Detective for the New York City Police Department. He was friends with Sam Burke while he served on the force and was one of the few cops to continue to assist Sam after his dismissal from the force.[1]

Later, Silbert gave Sam the shake down asking how he knew to check Sarah Frost's neck for the mark. Sam tells Silbert all the new victims have this mark but pleads he knows nothing more.[4]

Retrieved from "https://imagecomics.fandom.com/wiki/S.O._Silbert?oldid=32567"
Community content is available under CC-BY-SA unless otherwise noted.