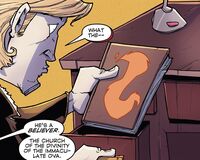 The texts were written in the alien fire-writing. They were housed in the The Church of the Divinity of the Immaculate OVA and created by Alani Adobo after she received a prophetic vision after eating nothing but Gallsaberry.[1]

The texts were later found at Thin-Ex Industries, when a scandal to kill Americans who consumed chicken and Thinergy Super Soda.[2]

Retrieved from "https://imagecomics.fandom.com/wiki/Sacred_Texts?oldid=29084"
Community content is available under CC-BY-SA unless otherwise noted.