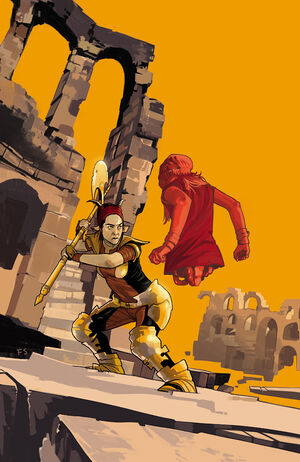 Crap. I think that means there's another ship closing in on us.

Years previously while still be held in captivity, Marko asks Alana to keep reading to him as a part of the 'secret book club' the two formed. While working out in the hot sun the two separated themselves from most others so that Alana could read and Marko could listen. Marko points out that the book by D. Oswald Heist is metaphorically talking about the war between Landfall and Wreath. Marko tells Alana he'll be transferred soon. Alana is worried he'll never come back and surprisingly shoots off his chain holding him prisoner. The two kiss and decide to escape together.

In the present, Marko argues with his mother about what to do next. They are about to be attacked by several creatures when a large fire-creature attacks everyone. Marko tells his mom to rest easy as he recognizes the voice. The fire-creature dissipates and reveals Izabel using her Illusion Casting to scare off the locals.

On the ship, Barr continues to give advice to Alana. When the trio teleport back onto the ship using the Crash Helm, the immediately order them to evacuate.

At that moment, The Will and Gwendolyn arrive on The Will's ship. The Will freaks out when he sees a Timesuck hatching. They launch a missile at the ship with Marko but they are too close for the missile to detonate. Instead the missile hits the Timesuck which then retaliates ripping The Will's ship apart.

Marko and Alana's long-lost babysitter Izabel finally returns to the fold, but at what cost?

Retrieved from "https://imagecomics.fandom.com/wiki/Saga_Vol_1_10?oldid=60413"
Community content is available under CC-BY-SA unless otherwise noted.