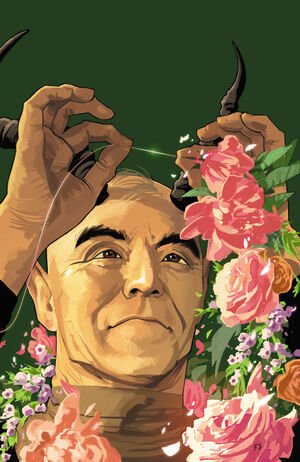 -- is down in the engine room. I was never a great father to that boy... but I was always loyal to his mother. That probably... counts for something... right?

Alana and Marko recall when they first decided to make Hazel. Alana was worried about them still being on the run and letting their throes of passion bring a baby into the world when they couldn't take care of it.

In the present during the Timesucks birth, The Will sees Lying Cat sucked out into space. He jumps out after him and uses his lance to piece the ship and pull them back in. Gwendolyn casts a spell to seal the hull so they can breathe again. The Will tells Gwendolyn he did see their ship with his own eyes, and they'll continue their hunt for him.

On Marko's ship, he argues with his mother about taking the Crash Helms to save his baby and wife and leaving her and Barr behind. He takes them and throws them into the kiln powering the ship and the ship takes off at a speed fast enough to escape the pull of the Timesuck. As the ship begins to break, Barr casts a Binding spell to hold the ship together. When Marko and Klara enter the room, they find Barr dead from heart failure.

Marko recalls being a young boy and learning to fly on a gigantic grasshopper. His father encouraged him to keep trying until he was successful.

It's an intergalactic family reunion, as Hazel's parents and grandparents join forces to escape a dying world.

Retrieved from "https://imagecomics.fandom.com/wiki/Saga_Vol_1_11?oldid=60414"
Community content is available under CC-BY-SA unless otherwise noted.