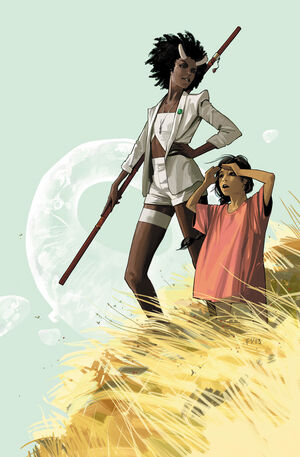 Peace isn't the opposite of war, my dear boy.

On Landfall, Even, Alana's long-time friend and now step-mother, is approached by two journalists. She tells them how she grew up with Alana but eventually fell for her father.

On Quietus, Marko hands Hazel over to D. Oswald Heist. Heist is amazed that his book came true and a love-child was created between warring sides. He suddenly pukes on the baby from being drunk.

On the crashed planet, The Will teaches Gwendolyn how to use his lance to impale flying sharks. She claims to be a natural as she nabs one on her first try. Slave Girl walks over to help clean and cook the fish for her master. The Will tells her that she should use her new name, "Sophie" and she robotically replies she'll go by any name that pleases him. Gwen and The Will talk about needing to help her get over her old instincts. The Will sees visions of The Stalk who eggs him on to attempt to kiss Gwen. He moves in and Gwen instantly pulls away and slugs him for kissing her.

Upon arriving back at the lighthouse, Klara and Heist clash over their ideals of war. They slowly begin bonding over similarities they have.

Later, the Will gets a call from a contact that he's spotted Prince Robot IV and he's apparently heading to Quietus.

Gwendolyn and Slave Girl think about the future.

Retrieved from "https://imagecomics.fandom.com/wiki/Saga_Vol_1_14?oldid=60438"
Community content is available under CC-BY-SA unless otherwise noted.