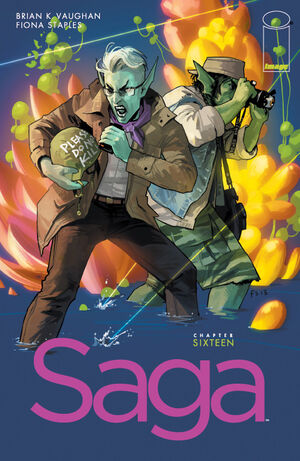 Unfortunately, my best man hasn't been returning calls from the last assignment I sent him on. But I can get you a close second.

Upsher and Doff stop by to speak with Special Agent Gale as he returns from working out at his building. When they show him a picture of Alana wearing a Wreath ring, they're ushered inside quickly. Gale informs them Alana is a secret spy and is in deep-undercover work so they shouldn't write a story on it. As soon as they leave, Gale makes a call to Erving, the freelancer agent, to make a rush job. The agent looks at a file by The Brand.

On Quietus, D. Oswald Heist tell stories about his ex-wife, Yuma joining the Circuit. This gets Marko interested in escaping the war with them. Heist heads upstairs to grab a book.

On the crashed planet, Gwendolyn tastes fruit from the garden and begin hallucinating. She asks the Lying Cat if he sees the person as well and the cat tells her she's lying. She runs back to the house to find Sophie trying to kill The Will. She stops her and ties her up. She tells Lying Cat they need to rush to Quietus as her ex, Marko, knows spells powerful enough to heal The Will.

On Quietus, Heist comes running downstairs in a panic. He tells them he spots someone approaching the house. Off in the distance, Gwen watches Prince Robot approach the house.

WINNER OF THREE 2013 EISNER AWARDS! Two war correspondents stumble onto the biggest story in the universe.

Retrieved from "https://imagecomics.fandom.com/wiki/Saga_Vol_1_16?oldid=60439"
Community content is available under CC-BY-SA unless otherwise noted.