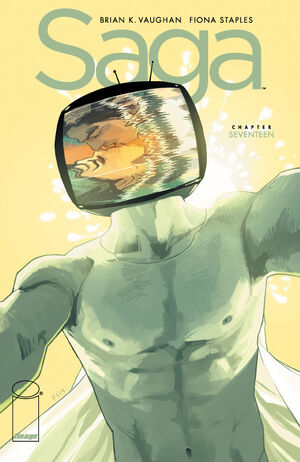 Because the opposite of war... is fucking.

Upsher lays with Doff in bed when he whispers he thinks they went to Quietus. They are both suddenly struck by darts from Sweet Boy. They turn on the lights and The Brand tells them if they mention a word of this story to anyone, they'll die from the poison in the darts. They ask why both sparring them and The Brand says she appreciates their support of the Union during the strike. As such, she will spare their lives as long as they don't talk about the story.

In the attic of D. Oswald Heist's lighthouse, Klara is ready to storm downstairs to save her new love, but Marko and Alana beg her to think about the family and stay hidden.

In the bathroom, Sophie apologizes to The Will. The Will tells her that it's not her fault as he closes his eyes due to blood loss.

As Alana and Marko argue, they suddenly realize Klara is missing.

Downstairs, Heist gets Prince Robot IV to think about when he was about to die. He recalls thinking about being in an orgy. Heist claims the opposite of war is sex, peace is just a lull in battle. Klara suddenly appears downstairs and threatens Prince and calls him a drone. He Prince retaliates and shoots at Klara and knocks her back. Heist yells no and points his gun at the Prince and shoots him revealing that his gun wasn't actually fake. He rushes to Klara to find out most of the blast was absorbed by her ax. She warns him that the Robot won't stay down long.

Gwendolyn bursts into the room. When Heist lurches at her, she stabs him through the head with her lance.

Prince Robot IV gets everyone into trouble.

Retrieved from "https://imagecomics.fandom.com/wiki/Saga_Vol_1_17?oldid=60443"
Community content is available under CC-BY-SA unless otherwise noted.