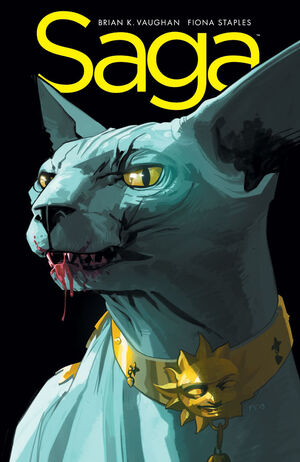 You're not the only one who's found someone new, all right? The man I love has been hurt, and I need your help to make him whole again.

Lying Cat tackles Klara, who manages to stab Lying Cat in the eye with her finger before being knocked unconscious. Izabel appears, and tells Lying Cat to stand down, as it was against the ordinance of Lying Cats to break the rules, and that he and (Gwendolyn) have no right to execute civilians in their own home, like they did D. Oswald Heist. Izabel then uses her illusion ability to scare Lying Cat out of D. Oswald Heist's home. She doesn't notice Prince Robot IV has also entered the house.

On the rooftop, Marko and Alana try to decide what to do next, and if they should jump. Alana reminds Marko that her wings are vestigial, and don't work. Gwendolyn bursts onto the rooftop, and demands to know the ingredient needed for a long-term healing spell for the man she admits to having fallen in love with (The Will).

Back on the rooftop, Alana attempts to tell Gwendolyn about a nearby hospital on Landfall. The two women end up in an argument over Marko, and Gwendolyn uses The Will's lance to attempt to kill Alana. Marko pushes Alana and Hazel off the roof. This shocks Gwendolyn, and as Marko begins telling Gwendolyn the reason for their breakup, she cuts him off, and tells him he broke her heart. Alana suddenly appears, using her wings to fly, and shoots Gwendolyn with the Heartbreaker, knocking her out.

On Jetsam, Upsher and Doff receive information from their chief about a chance to work on a story about Prince Robot IV, who has been missing for weeks, and is about to have his first baby with his wife. Upsher and Doff turn the story down as they still have the poison from The Brand in their systems.

In a hospital on Landfall, The Will lies in a semi-conscious state in the intensive care unit. The Brand visits The Will, informing the hospital staff she is his sister. Upon The Brand's arrival, The Will utters the name "Sophie."

Elsewhere, a few months later, Alana and her family have moved forward in their lives, and Hazel has begun walking.

Our heroes' stay on Quietus reaches its inevitable conclusion.

Retrieved from "https://imagecomics.fandom.com/wiki/Saga_Vol_1_18?oldid=60442"
Community content is available under CC-BY-SA unless otherwise noted.