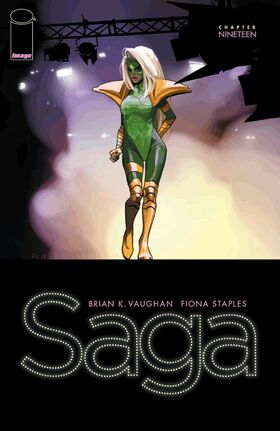 That thing is not a pet, I only bought her for the blubber. Who knew my granddaughter would fall in love with the shitting monstrosity?

On Robot Kingdom, Princess Robot gives birth to her son. Meanwhile, just outside the Princess's door, a janitor thinks of the dance Special Agent Gale shared with the Princess, as he cleans the hallway.

On Gardenia, Marko (now disguised with blonde hair and bandages wrapped around his face) watches Hazel as she enjoys herself at the park. He lets Hazel play in a bouncy house with her wings tied down so others can't see that she is a half-breed. A woman named Ginny approaches Marko, and offers him a chance to bring Hazel to her dance studio to help Hazel burn off some of her energy.

Meanwhile on the set of the Open Circuit, Alana continues her acting career, and is heckled by a man in the audience. Alana suddenly breaks the Fourth Wall, and calls the audience member out. This causes the act to be cut short. Alana is then approached by her Trix, the producer, and told she's fired. Alana pleads with Trix, mentioning she has a child to support, and is in need of her job. Yuma, the set designer, rises to Alana's defense. Trix takes pity on Alana, and tells her to clean up her act.

On the wooden ship, Izabel walks Friendo around the ship. After Alana gets home, she finds out from Klara that Marko took Hazel to the park, which causes Alana to become angry with Marko. The two argue about their need to hide from the public, but stop once Hazel enters the room. They all hug as a family.