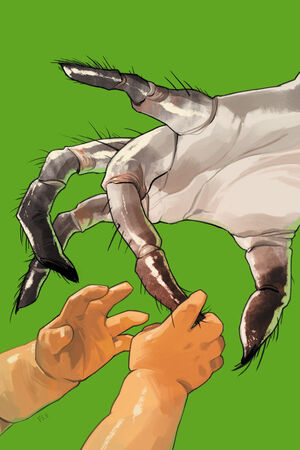 The Will patches himself through to his agent. His agent tells him he'll be going against The Stalk. The Will begins thinking about how this is pointless as the Stalk will get to them first. He decides to head to Sextillion first to waste some money and at least enjoy the unlimited credit card while he can.

Meanwhile on Cleave, Alana and Marko struggle with local plant-life attacking them. Marko asks Alana for a secret to power his spell. She tells him that she secretly enjoys the taste of her own breastmilk and Marko uses it to disintegrate the plants. After many hours of being up straight, they talk about how they need to get to safety and slowly they fall asleep on each other's shoulders as the Horrors watch them from a distance.

Elsewhere, Prince Robot IV is welcomed to Cleave. He's told by the person welcoming him that he knew Alana and that she typically kept to herself and read books. Prince Robot becomes suddenly alarmed and asks him what type of books?

Alana and Marko wake up and sense a presence. Marko lays down his weapon as a sign of good faith. A woman reveals herself from the shadows and introduces herself as The Stalk. She stabs Marko through his shoulder with a barbed tongue incapacitating him. Alana pulls out her Heartbreaker and the Stalk laughs that a stungun won't hurt her. She then holds the gun to Hazel's head and tells her she'd rather kill her family than let it fall into her hands. The Stalk appears concerned and they hear movement in the woods. The Stalk backs down and tells her if she knows what's best for her, she'll kill the child as the Horrors are coming.

A group of Horrors, that appear to be adolescent in age, appear before Alana and offer her their help.

The ongoing epic continues! After deserting their galactic armies, former soldiers Marko and Alana must now protect their newborn girl from the lethal killers dispatched to destroy their family.

Retrieved from "https://imagecomics.fandom.com/wiki/Saga_Vol_1_2?oldid=60403"
Community content is available under CC-BY-SA unless otherwise noted.