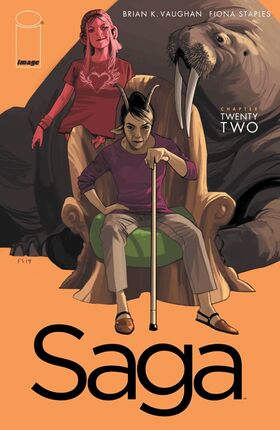 Izabel babysits Hazel when Klara walks in speaking Blue Language. Izabel says she can't hear a word they're saying at that Alana and Marko must be out of range for the translator rings to not be working. Hazel suddenly translates what she was saying to Izabel.

Meanwhile on the set of Open Circuit, Alana forgets her line but makes up for it by quoting a D. Oswald Heist joke and the audience roars in laughter. After exiting the stage, Yuma scolds her and tells her she's giving away information that could get her caught. At the same time, Upsher takes off his virtual reality and tells Doff that he may have found something.

Prince Robot IV returns to the Robot Kingdom and mourns the loss of Princess Robot. When he approaches King Robot, he is rebuked for being a coward and a failure. Special Agent Gale arrives and tells Prince that he had a beacon stashed in every Robot Kingdom ship. So even though Dengo ripped out the tracker beacon from the Robot Kingdom, his is still active and he's heading to the Uncanny Valley.

Marko returns home and finds Alana stoned on drugs. When he confronts her, she lashes back out at him telling him she knows about him spending time with Ginny. Marko throws his bag of groceries at her when he finds out Alana has been stoned around their child. Alana kicks Marko out of the house and he skulks away.

Trix, Flipjack and Yuma leave the set and are approached by Dengo. He tells them he needs to be broadcasted immediately to tell the plight of his people being mistreated while the royals live well. Fllipjack tells him that he will need to wait in line if he wants a job and instantly has a hole blasted through his face by Dengo. When Trix tells him they shut down and don't have the authority to start a broadcast he blasts a hole through her chest as well. Dengo turns to Yuma and Yuma pleads that she can help by showing her a half-breed. She tells him she has something more valuable than air-time.