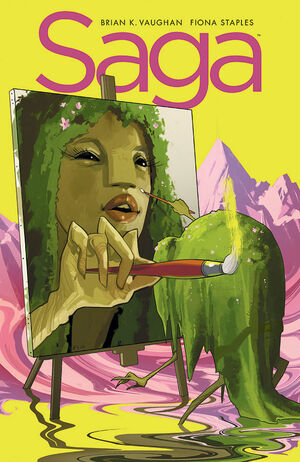 Unsure of where go to, Marko shows up at Ginny's house and ends up telling her how he and Alana had a major fight which resulted in Alana telling Marko to leave. Ginny invites Marko inside for a cup of tea. Marko realizes showing up at Ginny's house was a mistake, and suggests he should leave, but ends up accepting Ginny's invitation.

Prince Robot IV arrives on Gardenia and finds the HMS Skyscraper has crash-landed. He finds a dirty diaper, and realizes his son is still alive.

Yuma pleads with Dengo to spare her life, and in doing so, tells him the story of a love-child born to a man from Wreath and a woman from Landfall. Yuma reveals the name of the child, and where the family is living. Dengo fails to understand how this information will help to further his cause, and Yuma tells Dengo that sex is more compelling than a boring story of Robot Kingdom civilians being mistreated.

Izabel tries to speak with Alana about their issues. She tells her that she once had a girlfriend. Izabel tells Alana that after she and her girlfriend broke up, she stepped on a landmine a few days later, and as she lay dying, all she could think about was her ex. Izabel tells Alana to appreciate what she has. As Izabel walks away, Alana takes more Fadeaway.

At Ginny's house, Marko and Ginny are about to kiss when he spots Ponk Konk, a doll Hazel can't sleep without. He grabs the doll and begins to leave. Ginny tries to convince Marko to stay, but Marko breaks down, and tells Ginny that his name is not Barr, and that he has no right to sully the name of his father. Marko thanks Ginny for teaching Hazel how to dance, and leaves in order to return to his family, with Hazel's doll in hand.

On the wooden ship, Hazel cries inconsolably for Ponk Konk, but no one knows what Ponk Konk is. Izabel mentions she thinks Ponk Konk is something Hazel plays with her dad. This makes Alana visibly upset, and causes her to proclaim how she misses having her family together, and wants things to go back to normal. Suddenly, the ship's intruder alert starts to go off. Dengo appears on the ship, and grabs Hazel. Izabel attempts to use her Illusion Casting to scare Dengo, but he informs Izabel that her illusions don't work on people from Robot Kingdom. Alana tells the ship to take off and Dengo falls over during the launch, causing him to drop Hazel. Alana flies to Hazel's rescue and grabs her. Klara jumps on Dengo in an attempt to subdue him, and bites his finger off. Dengo manages to knock Klara off of himself, and holds her hostage. He tells everyone they need to head to the coordinates he gives them, or else.

Back on Gardenia, Marko arrives just too late, and watches as the wooden ship takes off. Yuma arrives and tells Marko she was a coward, and is ashamed of what she has done. Before Yuma can say more, Prince Robot IV arrives and holds his arm cannon at Marko, telling him he should have known Marko was behind everything.

Retrieved from "https://imagecomics.fandom.com/wiki/Saga_Vol_1_23?oldid=60391"
Community content is available under CC-BY-SA unless otherwise noted.