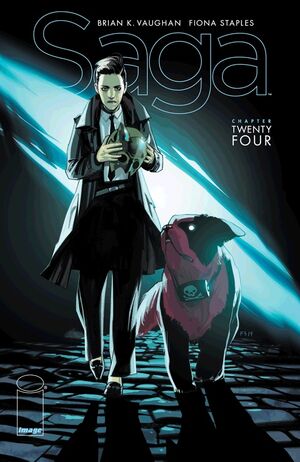 Elsewhere, Sophie, Lying Cat and Gwendolyn steal a healing formula from a research facility. As they leave, they encounter The Brand and Sweet Boy waiting for them outside. At first the begin to fight but The Brand realizes through the girl being calls Sophie and Gwendolyn having his weapons, they are aligned and trying to help The Will. Gwen claims he's the only one that can help complete the job she needs done. The Brand agrees to help. Gwen reads the ingredients and tells them they need Dragon Semon from Demimonde.

In a vision, The Will recalls sleeping with The Stalk and in throes of passion she announced she wanted to have kids. He stops and was shocked that she would. She tells him he's killed the mood and leaves telling him it was just something she said.

In the hospital at Landfall, two nurses clean up The Will's room and take care of him.

On Quietus, Yuma arrives and tells Ghus something terrible has happened. She asks if he still has a Psychic Link with his animals. He responds he doesn't know how far it goes. Marko and Prince Robot IV appear and butt in that they need his help to track Friendo across the galaxy.

Retrieved from "https://imagecomics.fandom.com/wiki/Saga_Vol_1_24?oldid=60392"
Community content is available under CC-BY-SA unless otherwise noted.