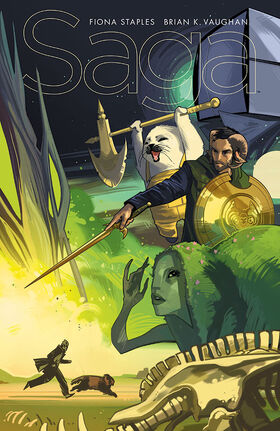 Hazel recalls how the Landfall Coalition used to have lottery for new recruits. Things have changed since then and people volunteer for reasons such as a sense of duty, seeking adventure, or trying to escape a bad situation. Most of the recruits were extremely poor.

On Demimonde, Dengo carries Hazel and the Prince's Son through the snow filled planet. Meanwhile, Alana and Klara are held in captivity in the Wooden Treehouse. Alana begins vomiting due to withdrawal from Fadeaway. Dengo returns and reveals he's summoned the Revolution.

Elsewhere on Demimonde, The Brand leads them on a journey to find demon semen to save her brother.[1] When they are suddenly attacked by one, they are peed on by the dragon which marks them. Suddenly, several dragons appear.

On Stalk's Skullship, Marko and Prince Robot IV push the boundaries of their temporary alliance as they team up to find Alana and the Prince's Son.