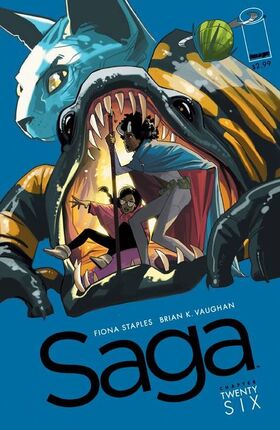 On their trip to find Friendo, a man enters a convenience store and holds a knife to the cashier. Marko was casually shopping in the store when he saw the man's horns. He begins speaking Blue Language with the man and explains he doesn't have to do this, he understands the man as he was a veteran as well. The man suddenly lunges at Marko. Marko enters a berserker rage once more and pummels the man to the floor.[1] When Ghus enters the store, he asks Marko what he's doing as Marko snaps out of his rage and the man lay unconscious on the floor. Prince Robot IV walks in and tells Marko to kill the man as he's seen his face. Marko refuses and claims violence is never the way. As they walk away, Yuma pilfers Fadeaway off the man's jacket as they leave.

On Demimonde, The Revolution begin scanning the area for danger. Inside the Wooden Treehouse Alana scolds Dengo for bringing terrorists there. Dengo counters they are freedom fighters dedicated to undermining the war. Alana reminds him that they do this via harming innocent civilians.

Elsewhere on Demimonde, Gwendolyn and The Brand battle the dragons. Sophie tells Gwen to use her translation pendant and speak with the dragons. Reluctant at first, Gwen finally agrees and when the dragons begin speaking with them they battle stops. The dragons tell them they are all females, only one male is left and he's not very nice. They say he is up on Hill Dontgo. The Brand wonders if they mean Mount Lazuli. From a distance, a man of the same race as the The Stalk peers through is sniper rifle at the trio watching what they do.

On Stalk's Skullship, Marko lashes out in anger at Yuma for loosing his cool and resorting to physical violence. Yuma informs him the reason Alana resorted to drugs was to find peace. Prince Robot wakes up later and finds Marko and Yuma passed out on the ground with foam coming from their mouths.

The Revolution check on Hazel and see that her wings and horns are real. When they learn they are dealing with Dengo, Quain hugs him and thanks him for murdering The Princess.