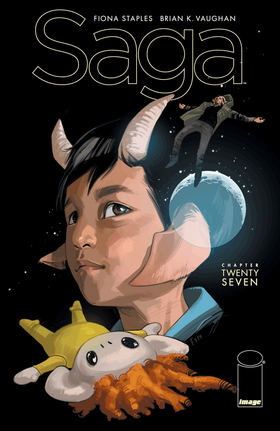 I'm going to find the man who ripped my family away from me. And I'm going to cut his fucking head off.

While tripping on Fadeaway, Marko experiences a flashback of him and Alana making love. Alana asks Marko to get rough, but he refuses, citing a story of once hitting a girl when he was a boy, and that day being the worst day of his life. Marko’s vision suddenly turns to Alana accusing Marko of being a wife beater, and then a hallucination of Marko’s father Barr bursting through Alana’s pregnant belly.

Presently, on the ship, Prince Robot IV and Ghus find both Marko, and Yuma incapacitated, having overdosed on tainted Fadeaway. Prince Robot IV briefly considers throwing Marko and Yuma out of the airlock, but after being convinced by Ghus that he'll need Marko in order to get his son back, Price Robot IV is forced to call the Surgeon General of Robot Kingdom in order to find out to treat a Fadeaway overdose. In an attempt to prevent alarms from being raised regarding his wellbeing, and who he’s travelling with, Prince Robot IV asks the Surgeon General to respect his confidentiality, and tries his best to remain vague about his current situation.

Unable to glean more information from Prince Robot IV, the best advice the Surgeon General is able to give is for Prince Robot IV to force his companions to purge, using his own blood to help speed up the process, as robot blood is mildly toxic to the digestive systems of most “lesser species”.

Marko wakes up from his hallucinations, and thanks Yuma for giving him the drug, which allowed him to understand his wife, and to find himself. He is now resolved to find the man who ripped his family away from him.