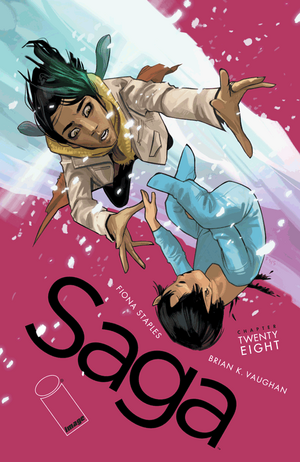 In the twilight hours, The Brand and Sophie talk about what it is like for The Brand to kill a man. She claims to not enjoy it the way her brother does. They are interrupted by Halvor who holds them at gunpoint. Gwen appears behind him and holds her lance to his head. The Brand tells everyone to calm down and explains they are there to save her brother, The Will. He gives them a dragon eardrum from the Stalk's Skullship. He tells Sophie to use it to find the Prince since she's from Phang. He then points them to the male dragon's lair.

Elsewhere, Dengo shows concern about the Revolution's arrival. Alana calls him out and says he appears concerned. Quain enters the room and prepares to take Hazel. He informs her it will be brought to the Wreath High Command and Alana freaks out. She starts beating Julep but Quain uses his Hypnosis to freeze her.

On Stalk's Skullship, Prince Robot IV announces they are under attack by the Royal Guard from his home planet. He believes they may have been tracked during the physician call he made to save Marko's life.[1] Marko orders everyone to battle stations. Their ship is struck and begins loosing fuel. He orders Ghus and Yuma to fix it so they can jump out of reach from the ship. Ghus shows them where he'll need to patch the fuel leak but will die due to the heat. Yuma knocks Ghus out and sacrifices her life to patch the ship.

Retrieved from "https://imagecomics.fandom.com/wiki/Saga_Vol_1_28?oldid=60327"
Community content is available under CC-BY-SA unless otherwise noted.