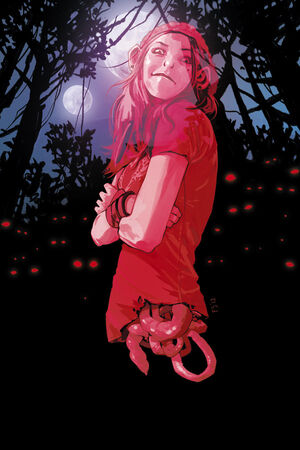 Call me ma'am again, I'll find a way to kill you a second time.

Izabel tells the other Horrors they should help them. Even though Marko is dressed like a Wreath warrior, he clearly loves his family and wants nothing to do with the way. The Horrors turn their backs and walk away. Marko coughs up blood from his wounds from the Stalk.[1] He tells Alana the only way to heal from wounds this deep is the ingredient snow. Izabel tells them she'll help them get snow so that Marko doesn't die, but at the cost of being linked with Hazel. She's only allowed to leave Cleave if she's bonded with someone alive that was born there.

Prince Robot IV is ushered to a room where he interrogates a prisoner about Alana's escape. He doesn't understand how he escaped or why he wouldn't have brought other Wreath members with him. He's show a book by D. Oswald Heist and The Wreath prisoner spits in his face. Prince Robot pummels the prisoner in return.

Alana trudges up the mountain lugging the weakened and dying Marko upon her back. Izabel tells her she knows a shortcut to the top to get snow, but wants to be allowed to bond with Hazel first. Hazel begins crying and Izabel helps Alana by giving her advice how to burp the child properly. She tells her that she was the oldest of seven and could be a good babysitter. She informs Alana that her parents were resistance members also fleeing from war but she died by stepping on a landmine during the war. Once you die on Cleave, you become a ghost and are stuck there unless they bond with someone else born on the planet. Reaching a point in the road where she can't move forward, Alana finally acquiesces to Izabel's request and lets her bond with Hazel. As they jump on a boat to get to snow to save Marko, Marko tells them to tell his Bride, Gwendolyn that he's sorry. They are all shocked and ask who is Gwendolyn.

As The Will approaches Sextillion, he receives a call from The Stalk. She asks him if he wants to team up and The Will tells her to buzz off. He never wants to work with her again. The Stalk continues fleeing from large beasts and she realizes this planet is more difficult than she imagined.

Retrieved from "https://imagecomics.fandom.com/wiki/Saga_Vol_1_3?oldid=60404"
Community content is available under CC-BY-SA unless otherwise noted.