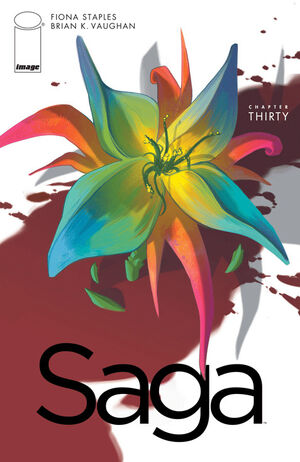 Why couldn't you just let me rot?

After crash landing on the planet, Marko wakes up amongst the wreckage. Ghus asks him for help with Prince who is laying injured on the ground. A determined Marko grabs his shield and sword and forges on to find his family.

In her prison cell, Alana attacks The Revolution and grabs a grenade of a Zizzs jacket. She threatens to blow them all up if they don't release her. They let her go as they don't think she's worth the trouble. Alana soon finds Dengo who tells her Hazel is safe for now, but they must grab something from the engine room. He hands her a gun for the journey.

Klara attempts to escort Hazel out, but suddenly Lexis and Zizz blast a hole through the ship and find them. They take Klara and Hazel to the engine room and decide to cut their losses and decide to hop-scotch teleport away.

Outside, Alana and Dengo escape with the fuel from the Revolution's ship. They suddenly run into Sirge who was standing guard outside the ship. Dengo blasts a hole through him killing him. In his dying breath, Sirge tells them he didn't see Hazel. Suddenly, the ship disappears. Dengo believes they couldn't have gotten far without the fuel they just stole. It doesn't help calm Alana as she begin taking her aggression out on Dengo. When Marko appears, the two embrace having not seen each other in months. Prince Robot walks up as well and spots Dengo. He asks if he's the one that took his son and murdered his wife. He then blasts Dengo in half, gaining his revenge.

On Landfall, Gwendolyn and Sophie sneak into The Will's hospital bed. They give him the antidote to save his life. He quickly makes a full recovery. However, when he spots Sweet Boy, he realizes his sister is not there. He learns his sister died protecting Sophie, he becomes enraged and throws them both out to grieve.

Meanwhile, on another planet, Hazel is introduced to her new teacher, Noreen as several Wreath children play around her.

Retrieved from "https://imagecomics.fandom.com/wiki/Saga_Vol_1_30?oldid=60270"
Community content is available under CC-BY-SA unless otherwise noted.