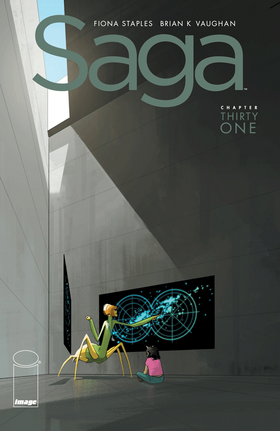 Nothing makes a kid grow up faster than wartime...

In a classroom, students get up in front of the class to demonstrate their drawings to their classmates. Most of them are of wartime memories and losing appendages as the direction was to draw something sad. Hazel gets up to present and shows a silly drawing of a man farting. The whole class laughs. Noreen steps in and tells Hazel she's glad her vocabulary has improved, but the farting does not fit the assignment. The class bell rings and the students run out screaming. Noreen stops Hazel and tells her she can tells her anything she wants. She says it will be a secret as she peers over at Landfall Coalition members standing guard over them. Noreen then hands Hazel a book and Hazel begins crying. It was the first tears she had shed in years.

Years ago, Hazel recalls how she fled from the The Revolution. She recalls how nothing made you grow up and not cry like wartime. She was on a ship with Klara and the Revolution when suddenly the Royal Guard arrived. They had been tracking Prince Robot IV's location and stumbled upon the ship. They initially considered surrendering but Zizz reminded them they had the trump card with the hybrid, Hazel, onboard. They were suddenly knocked back by an energy ray and an announcement could be heard that they were about to be boarded. Hazel recalls how over the next few years, "auntie lexy" was very nice to her. However, at the time Klara grabbed a heavy weapon from the ground why everyone was distracted and smashed Zizz's head in, killing him. When Klara turned towards Lexis, Lexis reminded her they were about to be boarded and would be murdered if they didn't escape.

Klara made up a story about the three of them being civilians forced into slave labor. As a result, they were brought to a detainee center on a planet under Landfall control. A worker mistreats them and brings them to Doctor Blaize. Blaize reminds her they had spent the last few years as 'comfort girls' according to Klara's story. The woman feels remorse for her harsh way of treating them and hands them over. When the guard leaves the room, the doctor transforms and reveals it was really Izabel. They rejoice that their friend is there to help them, however, Lexis butts in and reminds them they need to come up with a plan as they don't think they will be able to keep Hazel, as a hybrid, a secret very long.

Years later on her fourth birthday, Noreen brings a cupcake to Hazel and wishes her happy birthday. Noreen tells her if she isn't wisked away she will be welcomed back with the prestigious title of "explorer" next year. Hazel runs to tell Klara about the good news. She runs into Petrichor in the shower and sees she has both female and male body parts. Petrichor tells he she's killed plenty of 'wings' in the war before she was kicked out of the army. Klara arrives and scolds Hazel for talking to strangers.

Later, Hazel asks Noreen what she thinks of Landfallians. Noreen says she thinks they're ok and doesn't have a strong distaste for them. Hazel then unexpectedly takes off her shirt and reveals she has wings to Noreen. Noreen is so shocked at the revelation that she is a hybrid that she passes out and knocks her head on a table. He head begins bleeding out on the floor. Hazel looks at her fallen teacher and remarks, "Oh, fart!"

NEW STORY ARC. After a dramatic time jump, the three-time Eisner Award winner for Best Continuing Series finally returns, as Hazel begins the most exciting adventure of her life…kindergarten!

Retrieved from "https://imagecomics.fandom.com/wiki/Saga_Vol_1_31?oldid=53509"
Community content is available under CC-BY-SA unless otherwise noted.