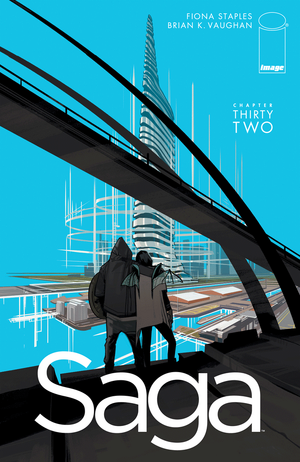 Anyone who gets close to them dies.

On Variegate, Alana and Marko infiltrate an enemy base looking for ship manifests. They knock out a guard and find the map room. They have spent years attempting to find Hazel and finally find fruition in their search as they find a manifest with descriptions of passangers that sound like Hazel and Klara.

A group of constables break into the room and order them to freeze. When Alana announces a missile is on the way to strike their base, they peer outside and see a see a green rocket trail headed for them. They take off in fear. Alana smiles and tells Marko that it's actually their Wooden Treehouse. She jumps out the window and tells him to trust her and jump to fall into the ship as it passes by. They succeed in landing inside the ship and head for Landfall, where they believe their daughter is being held.

Meanwhile on Quietus, Ghus runs to tell Prince Robot IV that a ship is approaching and it's probably Marko and Alana. The Prince tells him he's now just Sir Robot and his son, Squire, won't meet with Marko and Alana as everyone that comes close to them dies.

Marko and Alana learn something.

Retrieved from "https://imagecomics.fandom.com/wiki/Saga_Vol_1_32?oldid=60271"
Community content is available under CC-BY-SA unless otherwise noted.