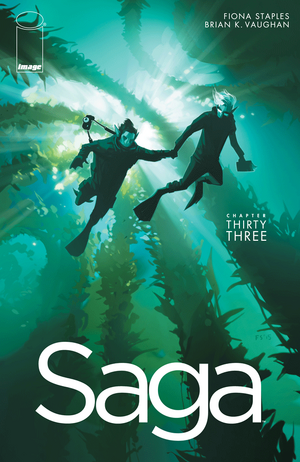 It's our job to go through the dirty sheets

On Jetsam, Doff develops a picture in his dark room. Upsher breaks into the room and ruins the picture as he announces he has important news. Upsher shows him a newspaper, announcing that The Brand has been murdered. He believes the drug that would kill them if they talked about the Marko will no longer be effective now that The Brand is dead. Doff tells him it's not worth the risk, but Upsher blurts out to their newspaper chief about Hazel being a wartime love-child. The Chief tells them to get serious and walks away. Doff begins to believe him but is still hesitant to chase the story. He begins to draw parallels to their own homosexual relationship with each other and wanting to be left alone.

They head to the airport. Upsher brings up the time when he heard Zipless make an obscure Heist quote on air while filming for the Open Circuit. Upsher then shows Doff a 'missed connection' ad in the newspaper, where a woman was looking to meet a man described to be like Marko.

They arrive on Gardenia. Henri answers the door and they ask to speak with Ginny. Ginny ushers them out back to speak to them in private. She slips about them being chased by a royal blueblood.

Upsher and Doff take a ship and travel around Outcome in an attempt to find heat signatures of Marko and Alana. They find Stalk's Skullship abandoned on a planet and move in to investigate. However, they are suddenly attacked by The Will. The Will has put on massive amounts of weight and uses his Lance to incapacitate Doff while he interrogates them. He demands to know where Prince Robot IV is located but they swear they don't know. He releases Doff from his lance and tells them they work for him now.

Upsher and Doff are back on the case.

Retrieved from "https://imagecomics.fandom.com/wiki/Saga_Vol_1_33?oldid=60444"
Community content is available under CC-BY-SA unless otherwise noted.