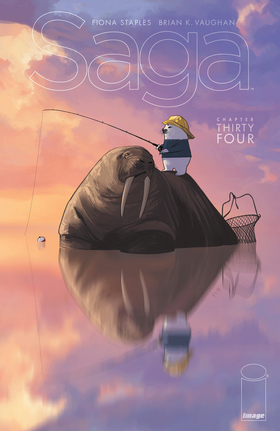 He's very clever, but I don't think artists should be ranked like racehorses. And no offense to the rest of your family... but anyone who thinks one book has all the answers hasn't read enough books.

Petrichor walks through the halls of the Landfall prison. She stumbles upon Hazel standing over Noreen's body. Petrichor is shocked to see that Hazel has wings and is actually part Landfallian. She tells her to cover up and quickly breaks the desk and tells her to lie and tell everyone Ms. Noreen slipped and hit her desk. Petrichor takes pity upon Hazel and believes she must be the result of a rape to be of mixed species. Hazel feels bad and doesn't bother correcting her.

On Quietus, Alana and Marko arrive in their Wooden Treehouse and wander the shores looking for their friends. Sir Robot surprises them and holds a bow to them. He orders them to leave and to never return. He reminds them of how he helped Marko after the Fadeaway overdose, which Alana never heard about. Alana tells Sir Robot that they need his help getting Hazel out of a prison. Squire pleads for his father to help when Alana plays up that their daughter is a maiden-in-distress and he must obey his chivalrous code. He still resists but ultimately gives in when Marko threatens to tell King Robot about their location. Ghus and Friendo promise to watch over Squire while Sir Robot is away.

At the prison, Izabel dresses up as a Landfall Coalition member to escort Hazel to see Noreen. They find her, wounded, in the basement. Hazel explains to Noreen how her parents fell in love even though they were from Landfall and Wreath. Noreen promises to keep her secret hidden from the Landfall Coalition as they would only harm the poor child. Hazel gives her a book to help her feel better and Noreen is overcome with joy that the child would be so selfless.

On Outcome, The Will and co. arrive in The Star-Whacker, and The Will orders Doff and Upsher to tell him where the Prince is located as he wants revenge. The Will is still accompanied by Sweet Boy and a vision of The Stalk. The Will kills a Sea Monster and tells the duo to keep moving. Upsher gives up and tells the Will to just kill him, he knows he would end up killing them when they found the prince anyways. The Will pulls his gun but Doff interjects and tells him he may have a lead from a friend who took pictures of the prince and the Princess a long time ago.

On the Landfall again, Klara and Lexis read stories from Heist's book to the inmates. Noreen stops by and quietly pulls Klara from the room. She tells Hazel she plans to help her escape so that her secret doesn't get her killed.