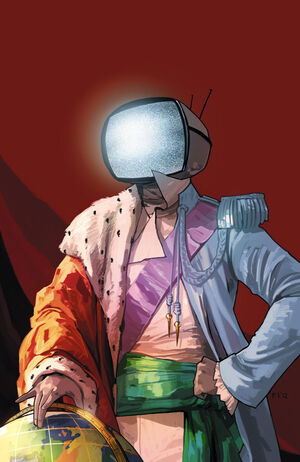 I've interviewed every detainee on this rock, and the only thing I'm close to catching is a staph infection.

Prince Robot IV sits on the crapper when he gets an incoming call from the Princess. She informs him that she's now pregnant. The Prince is shocked. She then tells him that the King has commanded that he not return until he's handled the defector, Alana. A soldier suddenly bursts into the room and tells them a scouting troop has spotted something.

Elsewhere, Marko reminds Alana that there should be no killing. One of the solders takes a shot and Marko deflects it with his blade. However, the deflected shot hits Alana. Marko enters a berserker mode and kills all the men. Alana shoots Marko with the Heartbreaker to snap him back to his normal self.

On Sextillion, The Will runs into Mama Sun as he attempts to free Slave Girl. She informs him that her contract has not ended and will cost six hundred and fifty credits to release her. The Will tells her he doesn't have the money and will steal her. Mama Sun informs him she was injected with a Security Elixir that will harden her arteries if she is taken from the planet prematurely. Mama Sun walks away with his unlimited credit card and tells him she'll call it even for damages when she takes the card.

Alana and Marko board the Royal Vondertank. Alana promises she can fly it and that she's ripped out the blue box that would track the ship's movements. Marko is frustrated that he used violence. He protests that violence only begets more violence and that he should always resort to other means. Alana assures him that it was the only option to save their family. Hazel suddenly lets out a laugh and Marko is shocked. He remarks that he didn't even know newborns could do that.

The Stalk finds the Landfall Coalition members tied together from Marko's binding spell. She receives a call from The Will who has changed his tune and now wants to partner with her. Prince Robot IV suddenly arrives and demands to know what happened. When The Stalk reaches for her phone, the Prince believes she's reaching for a weapon and shoots a hole through her chest, killing her instantly.

Retrieved from "https://imagecomics.fandom.com/wiki/Saga_Vol_1_5?oldid=60431"
Community content is available under CC-BY-SA unless otherwise noted.