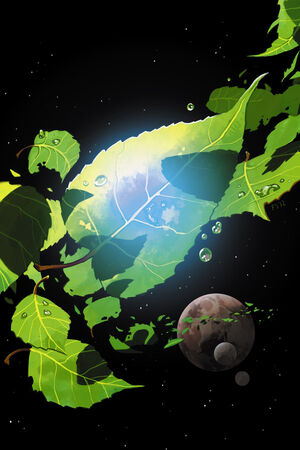 Listen to my voice, boy. I aim to murder you... right after I murder everything you ever loved.

Marko and Alana arrive at Rocketship Forest. As the night falls, Izabel returns and is able to dispel an illusion that is hiding a gigantic wooden rocketship. Marko is excited as the wood should keep them hidden from modern detection techniques.

Elsewhere on Cleave, Prince Robot IV looks at the dead body of The Stalk. He sees she suddenly is receiving a call from The Will. He answers and informs The Will that he has just murdered The Stalk for violating code. In anger, The Will yells at the Prince and threatens that he'll kill everyone he holds dear.

Izabel informs them they must sacrifice something of value before getting on. Marko decides to break his sword, which was a family heirloom for generations. After snapping it, the doors open and allow them to enter. Inside the ship has a fancy foyer and Alana is elated to see all the amenities. The ship suddenly begins taking off. Izabel informs them that they just have to think about where they want to go and the ship will guide them there. Alana tells Marko she always wanted to head to Quietus.

Prince Robot IV boards a local ship. He receives a call from Special Agent Gale and informs him that he's killed The Stalk. Gale is shocked that Wreath High Command know about the couple and baby as well. Gale orders him to find out where they are headed if they've escaped. Prince Robot opens the book that Alana had been reading by D. Oswald Heist. He mentions he lives on Quietus and he begins to think he needs to head there to find them next.

On the ship, everything suddenly turns blue and Izabel tells them the ship is trying to communicate with them. She tells them they are being tracked and magic is inbound. Two soldiers appear. They use magic to banish Izabel. Marko yells in Blue Language for them to stop. The duo remove their helmets to reveal that they are Barr and Klara, Marko's parents.

The epic hit series continues, as Alana and her baby finally reach the legendary Rocketship Forest, where everything changes forever.

Retrieved from "https://imagecomics.fandom.com/wiki/Saga_Vol_1_6?oldid=60409"
Community content is available under CC-BY-SA unless otherwise noted.