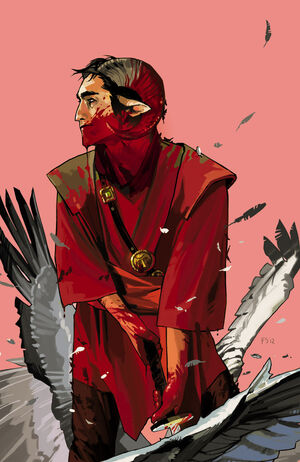 When Marko was a boy, he played on Wreath with his dog, Rumfer. His father took him to the place where the last battle on Wreath took place. The soil was still stained from the massacre and Marko was told to never forget their sacrifice. He began to hate Landfall from that moment.

In the present, Marko introduces his parents to Alana. He asks what they did with Izabel and they tell her she's been banished to a local planet. Marko grabs her Crash Helm in order to teleport and save her. Klara heads through the portal with him. Barr follows Alana through the ship asking if the child is normal. Alana has the ship use its vines to bind Barr in place.

On the nearby planet, Marko pleads he only broke the sword to save his family. Klara tells him that she knew he was in trouble when a Freelancer stopped by their house earlier. They are suddenly attacked by a large creature.

On the ship, Barr warns Alana that he can break free any moment. Alana says she knows that spell and won't tell him any secrets. Barr informs her it doesn't have to be hers and tells her he only has one month left to live and the vines disintegrate. He casts a sleep spell on Alana and takes the baby from her as she says out loud, "Hazel."

Retrieved from "https://imagecomics.fandom.com/wiki/Saga_Vol_1_7?oldid=60410"
Community content is available under CC-BY-SA unless otherwise noted.