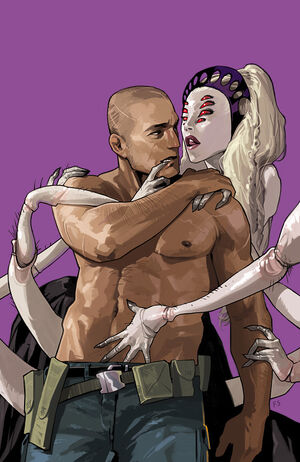 So you're the deadliest Freelancer money can buy? This is why I never trust reviews.

The Will has a dream that he frees Slave Girl from Mama Sun. He dreams his sidekick is The Stalk and she's still alive.

Snapping out of his dream, Gwendolyn wakes him up and asks if this is really the best money the Wreath High Command could buy. Gwen tells him she just wants to make sure these two traitors are killed so as not to spark a union of forces. The Lying Cat calls her out. The Will tries to tell her that he needs a bunch of money to complete his task and the Lying Cat reluctantly calls out his master. They both agree to work together and Gwen tells him a plan.

She calls Mama Sun and tells her she's with a detective agency investigating whether any six-year olds have been sold into slavery from Wreath that had their horns sawed off. Mama Sun quickly agrees to return the girl so that the Landfall forces don't get upset that they were sleeping with a Moony.

At the drop off point, several armed guards from the Sextillion Loss Prevention inform them they knew this was most likely the Will's work. They tell them to leave and no one gets hurt. The Will and Gwen launch a surprise attack killing the men and freeing Slave Girl once more.

Once they boarded their ship, Gwen pointed out that The Will did not have a plan for what to do with Slave Girl next. She would need counselling and they couldn't just send her back to the monsters that sold her into slavery in the first place. Sophie interrupted pointing out that Gwendolyn's translation pendant was lonely. They were shocked and wondered if it could sense Marko's rings that were forged at the same time as the pendent. Slave Girl pointed them in a direction to where the pendent was lonely.

The Will finally has a good day.

Retrieved from "https://imagecomics.fandom.com/wiki/Saga_Vol_1_9?oldid=60432"
Community content is available under CC-BY-SA unless otherwise noted.