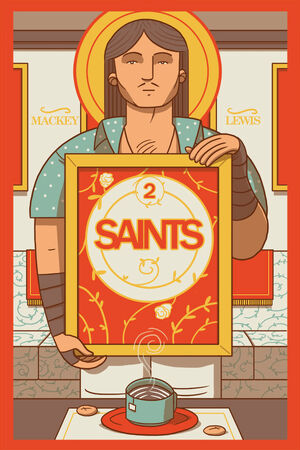 Blaise and Sebastian go to Lucy's house. When Lucy's mother asks the boys what they were doing with their daughter, they tell them she's a reincarnation of Saint Lucy. They tell Lucy's parents that they were called to be a martyr for heaven. Her parents asked her if it was true and she admitted. Her parents then embraced her, telling them there couldn't be a better blessing. They asked if they need anything and Sebastian tells them they need a car as Blaise crashed theirs. While Lucy went to pray with her parents, Blaise told Sebastian to steal their Jesus painting.

On the drive to Arizona, Lucy told Blaise the painting had a terrible judge in character if the painting truly did speak to him. When Lucy said she believed she was the only sane person in the car, Blaise reminded her she has candles in her hair. When Blaise began teasing Lucy, Lucy tossed her burger toward Blaise.

While Lucy was sleeping, Sebastian told Blaise he was hard on Lucy. Blaise told Sebastian he was tired of her making sense and the two came to an agreement that they had no idea what they were doing. Sebastian then noted that they are saints and that all saints are known to die terrible deaths.

SEAN LEWIS and BENJAMIN MACKEY follow up their audacious debut with a wild second issue. After heading to the suburbs to let Saint Lucy's parents know their daughter will be quitting her job to fight demons full-time, Blaise and the crew drive cross-country to find out the meaning of their shared visions. What they find is a terrified teenage runaway with a dark past and an even darker gift.[1]

Retrieved from "https://imagecomics.fandom.com/wiki/Saints_Vol_1_2?oldid=50268"
Community content is available under CC-BY-SA unless otherwise noted.