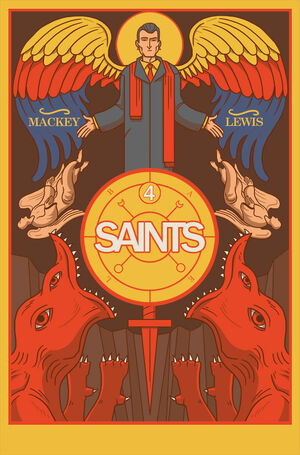 Daniel performs a sermon in front of Archangel Michael's followers. Following the sermon, he was told he did an amazing job and that his sermon would be broadcast twice later that night and then throughout the week. Daniel questioned why they were chosen by Michael. Daniel is told that revelations has told that a soul would unite the people on earth and that the soul would create his own army. Daniel is told they don't choose their roles. When Daniel told the man that revelations call the angel arriving the anti-christ, he is told they don't serve the anti-christ but if they need another to usher their lord into their world that is their lot.

Blaise awakes in the car. Lucy told him he was having a bad dream and they could talk. Shortly after, they arrived to their destination in Albuquerque. Blaise introduced the Saints to Mutilated Corpse, a band he was a groupie of. When Rob called Lucy a bleeder, Lucy told him that if he called her that again, he would wake up with blood between his legs, while glowing her eyes. Rob asked what she was and was told by Sebastian that Lucy glows her eyes and has a morbid interest in castration.

Jose took Blaise to his basement. Jose cut Blaise's hand to perform a ritual but to no success.

Michael went to visit Saint Anthony. Anthony told Michael he knew what Michael came for and that he would surrender. To ensure Michael doesn't take anymore, Anthony summoned his "friends" on him, though Michael fought them off. Anthony begged the lord but Michael told Anthony he wasn't worth his cry. Michael proceeded to behead Anthony. A teenager runs off as he found Michael but the latter used his lasso on him. Michael then found a trap door where children and teenagers were hidden.

Lucy awoke and found Bael on Blaise's chest. Lucy woke Blaise up, who was unable to see Bael on top of him. Lucy hit Bael who jumped off Blaise's chest. As Sebastian woke up, Lucy told him there was an invisible intruder in the house. Jose and Rob awoke where Jose eagerly told them he summoned Bael. When Stephen woke up, he asked why Lucy was wielding flour and Lucy told them the a-holes in the house conjured a 3 headed dog. After Lucy tossed the flour on Bael, Rob was upset as he planned to use that flour to make brownies. Stephen told them that it wasn't a dog but a demon and it was a sign that something bad had happened. Stephen told them that there was an old man like them, Anthony, who kept demons like that in his house, along with kids. Anthony told them that he protected special kids like him and prophets were making an army called "The Childrens Crusade". Bael went toward Jesus Pimp, where it told them "Rejoice, for now you go to war".

The wild group of Saints exit to New Mexico after battling Michael's Southern Fried Henchmen. There an old friend of Blaise’s plays some metal records backwards and accidentally conjures Baal, the prince of hell. Heavy Metal, irreverent humor, and saintly murder continue in this ongoing series.[1]

Retrieved from "https://imagecomics.fandom.com/wiki/Saints_Vol_1_4?oldid=54286"
Community content is available under CC-BY-SA unless otherwise noted.