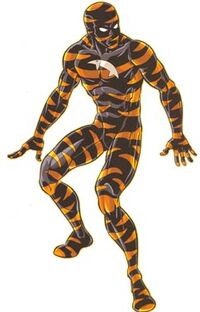 Salamander is a member of the Lizard League. Although slight of stature, he is a formidable opponent and a member of the League's team of superhumanly powered enforcers. Confrontations with heroes like Invincible, Atom Eve and Shapesmith have all ended badly for the Salamander resulting in a steady cycle of incarceration quickly followed by a break out repeated over and over again. He is believed to have escaped imprisonment most recently during a botched breakout attempt by Doc Seismic. Those individuals who might face him would do well to remember that Salamander is a ruthless individual who would not hesitate to use his deadly powers to achieve his or the League's criminal goals. How Salamander acquired his powers is at this time unknown.