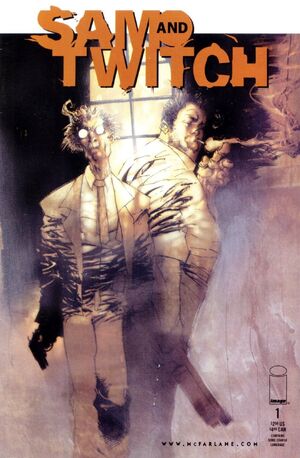 Twitch Williams sits in a bar drinking his problems away. He sits next to a hat that isn't his when a woman asks him why the long face. He goes on to tell her the story of a strange series of events.

He tells her about Sam Burke, his loud, mule-headed, stubborn partner that he loves working with. He tells her how they recently were rehired as Police Officers from the PI gig.

Their first gig was a doozy. They arrived to find a room full or murdered guidos. Twitch finds four severed thumbs at the crime scene, with none of them appearing to come from the dead bodies.

Later, K.C. McRory tells them she's examined the four thumbs. They all have come from the same body but are at different stages of genetic maturity. She's baffled as these couldn't have come from the same person but the DNA tests say they have. She then tells them an officer came down earlier and dropped the files she had on the lieutenant's desk already. An officer walks in and informs them there's been a double homicide and they found four severed ears at the scene. Sam and Twitch are shocked at the news.

They arrive and find men with their heads turned around 180 on their shoulders.

At the Police Station, Sam and Twitch talk to the lieutenant. They express concern of their file being re-routed to the lieutenant and that they shift captain is going to chew them out. He tells them he won't as he was one of the dead bodies at the poker game. He tells them to keep a tight lip and hit the street to get information on the case. They suddenly get another case call.

Upon arriving, they find four male genitalia cut off. They joke how Doctor Death, K.C. McRory, will have a fun time with this one. They look up and see a man in an alley. When they tell him to freeze, a car flies in front of them. They see Lieutenant Barnes in another vehicle taking off.

Retrieved from "https://imagecomics.fandom.com/wiki/Sam_and_Twitch_Vol_1_1?oldid=42756"
Community content is available under CC-BY-SA unless otherwise noted.