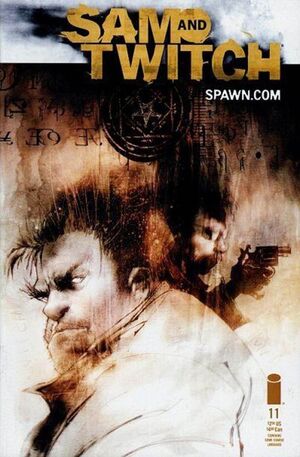 Monica Straight tells the story of a man posing as a police officer and molesting a small boy. She tells the crowd of officers there is no room for tolerance. if any of them question whether they will have a moment of weakness in being a cop, they should quit now. She tells them they should thank Sam Burke and Twitch Williams for standing against Udaku and the corruption in the department. She asked them to step forward but they are not present.

Elsewhere, Sam tells Twitch that he misses classic stabbing cases as they stand over a mutilated body crime scene. A new murder scene for them to investigate. K.C. McRory tells them this scene is connected with the witch murders. She found salt at both of them.

To get more information the duo visit Bernadette, a Wiccan officer. She tells them the Wiccan way involves peace. The murders will mess with their community and the celebration of the vernal equinox. She tells them the salt could represent the earth. The same way a pentagram does and hands them the Book of Shadows to help them research. She tells them about the upcoming gathering of witches to celebrate the equinox.

Later, Sam and Twitch attend the equinox but the killer never shows up.

Elsewhere, Sam and Twitch canvas the covent members for more information. Nia Bates tells them she knows the victims but not much more. Later, Nia Bates walks through the alleys talking on the phone. She tells them about how much information she's given up which was not much. She's suddenly approached from behind by a man from the shadows.

Retrieved from "https://imagecomics.fandom.com/wiki/Sam_and_Twitch_Vol_1_11?oldid=42766"
Community content is available under CC-BY-SA unless otherwise noted.