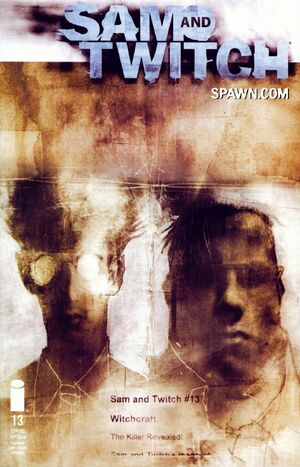 In 1692, Sarah Goode stood on trial in front of a village for being a witch.

In an interrogation room at New York City Police Headquarters, Sam Burke grills A.J. Ritter about running from them and popping a shot. Sam steps out to talk with the prosecutor. He tells Sam he needs a confession as he's crazy. Sam argues he tracked down people from the internet, he's coherent and methodical. Suddenly, Ritter slams his face against the window and screams about the time. He claims his family has the Goode curse and he must complete his ritual. He tells them he's studied the book Maleficent Maleficarum, a book used by witch hunters to track and kill as many as he could before his time.

He explains when Sarah was hung, she told the Reverend he would die by clicking on his blood. He soon did. A.J. is a decendant of the Reverend and is concerned he is also cursed. The cops lock him up in prison. They are soon called back in to find his dead body mangled. They detect salt in his blood as well.

Sam heads to Nadja's and confronted her on if she did anything to kill A.J. She tells them she cast a spell on a candle. He thinks it is all BS and walks out. She gives him a bag to bring good fortune to him in the future.

Retrieved from "https://imagecomics.fandom.com/wiki/Sam_and_Twitch_Vol_1_13?oldid=42768"
Community content is available under CC-BY-SA unless otherwise noted.