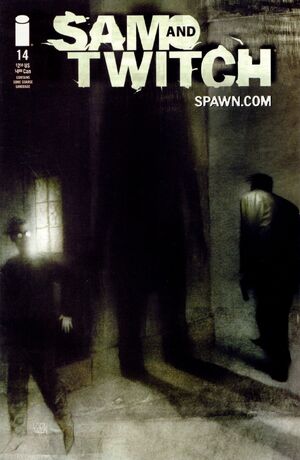 Appearing in "Dumb Laws and Eggs"

Twitch Williams looks up silly laws on the internet. They are particularly perplexed by one where woman is not allowed to wear patent leather shoes. They suddenly receive a call about a murder case and head out the door.

Upon arriving at the crime scene, they find a man dead on the floor with an egg cracked on his back. They feel it's an open and shut domestic violence case. The woman sits in the next room and is not speaking. They arrest her as the only possible suspect.

As they get into the car, Sam Burke continues to babble about the patent leather law making no sense. The woman speaks for the first time and solemnly informs them it's because when the leather is shiny, men could see the woman's panties.

Back-Up Story Earlier, a man tells his friend that he's going to break up with his girl. When he first got together with her, she told him that she's allergic to eggs. Everywhere they went she's ask if there were eggs and if she didn't believe the waitress or thought she got a bad look, she'd even go into the kitchen to ask the chef.

One day recently, he sneaked out of bed to eat some brownies. When she got up to see what he was doing, she asked for a bit. The man tells his friend he was confused as she was allergic. She then admits that she thinks they are yucky and just tells people that so they don't think she's weird. The man tells his friend he took and egg and smashed it on her head and just laughed at her.

Retrieved from "https://imagecomics.fandom.com/wiki/Sam_and_Twitch_Vol_1_14?oldid=42769"
Community content is available under CC-BY-SA unless otherwise noted.