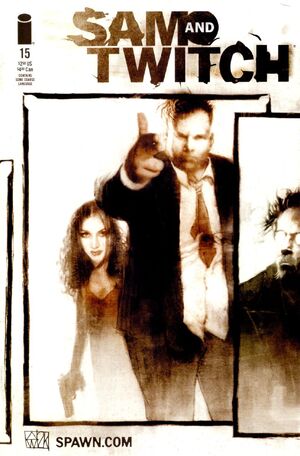 Twitch Williams sits in K.C. McRory's apartment as they discuss his kids and activities they could all do together to spend time. K.C. tells him she works so hard at her job because she's afraid she'll get a kid in the box situation. One where they never solve or get closure for a poor innocent boy.

A bullet flies in from outside and strikes K.C. Twitch rushes her to the hospital and the doctors tell him she'll be in critical condition. Sam Burke arrives and tells him a fugitive was hiding out next door. A bounty hunter named Bilal was hunting the fugitive when he let out a few warning shots. One of the bullets, ricocheted into their apartment striking K.C.

Twitch leads the charge down to where the bounty hunters receive their assignments. He looks asks for Bilal's contact info and is given a PO box. A woman named Jinx Alameda tells them she'll help them find Bilal. He stole a bounty from her and she wants back at him. The three leave together to start their search. Behind them a man lowers his newspaper revealing himself as Bilal. He walks up to the bond booth to get paid and takes off.

Retrieved from "https://imagecomics.fandom.com/wiki/Sam_and_Twitch_Vol_1_15?oldid=42770"
Community content is available under CC-BY-SA unless otherwise noted.