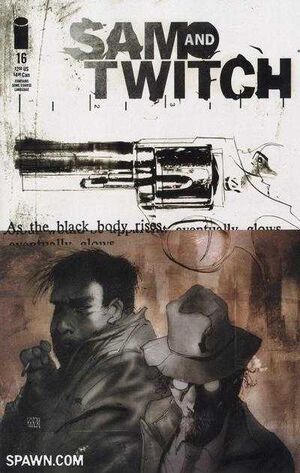 Manara sits in a dinner telling his buddy Pratt and perp Bob Matson about a bust he pulled with ]]Jinx Alameda]]. She did ask the work of flirting with their target and cuffing him when Bilal showed up. He knocked Manara out and took the prep to get the bounty. Jinx was all riled up that she slept with Manara to get her energy out.

Pratt jokes that his friend is full of BS when Bilal showed up at the table. He tells them he's taking Bob Matson and turning him in himself. Manara allows it and is too afraid to pull out his gun to stop Bilal.

Jinx, Sam Burke, and Twitch Williams show up at the dinner. Manara agrees to give rheum the location of where he is headed, Munoz Bail Bonds.

At Bail Bonds, Bilal walks Matson into the building. A sudden gun shot rings through the air. The trio arrive in the Crimemobile and hear more gun shots. Sam orders Jinx to get on the birth and call in the shooting as they rush into the building.

Elsewhere, K.C. McRory starts to flat line at the hospital.

Retrieved from "https://imagecomics.fandom.com/wiki/Sam_and_Twitch_Vol_1_16?oldid=42771"
Community content is available under CC-BY-SA unless otherwise noted.