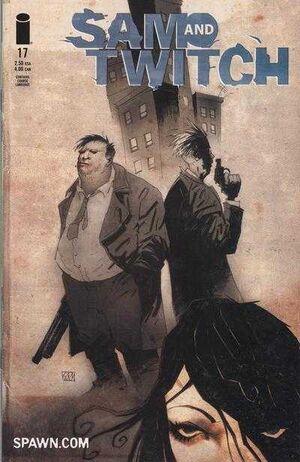 When Carlo Munoz got the call from Manara that Bilal Christian was on his way, he pulled out his guns. As Bilal kicked in the door, Carl fired his shotgun. Bob Matson took the shot to the chest and fell over dead. Bilal pulled his gun and shot down Carl. He looked on Carlo's desk trying to figure out what just happened. He found Manara's name as the last person he had contacted. He suddenly heard a noise outside as Sam Burke and Twitch Williams pulled up.

After an exchange of shots, Bilal attempted to escape through the back. When Jinx Alameda was waiting for him in the alley he asks to cut a deal. A boy walked out into the alley and Bilal uses the opportunity to escape. Police suddenly arrive and tell Jinx to freeze.

Retrieved from "https://imagecomics.fandom.com/wiki/Sam_and_Twitch_Vol_1_17?oldid=42772"
Community content is available under CC-BY-SA unless otherwise noted.