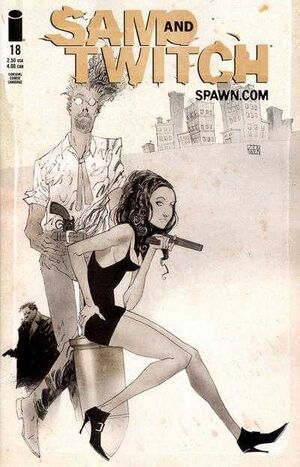 Sam Burke orders the cops to stand down. He gets a call from Monica Straight and is informed K.C. McRory passed away.

Twitch Williams had already infiltrated the building solo. He was determined to exact his revenge on Bilal Christian. He enters a movie theater and shots at Bilal. After a brief exchange, Twitch is knocked out by Bilal when he gets to close.

Jinx Alameda and Sam wake Twitch up with smelling salt. He asks if they got him and they inform him he gave them the slip. He pulls out his phone to call KC but Sam stops him. He informs him she had passed away already. Twitch spots Manara and Pratt of in the distance and arrests them for tipping off Carlo Munoz and putting them in the line of fire.[1]

Retrieved from "https://imagecomics.fandom.com/wiki/Sam_and_Twitch_Vol_1_18?oldid=42773"
Community content is available under CC-BY-SA unless otherwise noted.