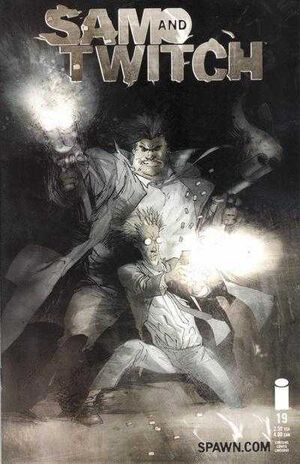 At Police Headquarters, The trio interrogate Manara and Pratt for Bilal's location. Suddenly Manara gets a call from Bilal Christian. He hannds the phone over to Twitch Williams. Twitch can hear on the other line get loud as other bounty hunter burst into Bilal 's room. They are mad he killed Carlo Munoz since Carlo owed them all money.

Twitch heads to the Crimemobile to search for Bilal. They get a call about shooting in Brooklyn, New York.

Upon arriving, local police say the description of Bilal matches what victims saw. When they corner Bilal, a tense situation arises. Twitch pulls the trigger and kills Bilal. He hangs his gun over to Sam Burke and tells him he quits.

Retrieved from "https://imagecomics.fandom.com/wiki/Sam_and_Twitch_Vol_1_19?oldid=42774"
Community content is available under CC-BY-SA unless otherwise noted.